In this three-part series we get to know three modern leaders of Fimpec. In the second part Sylvain Koivulampi describes how openness has been with him throughout his career at Fimpec and how one’s own actions and skills have a big impact on the success of a project. 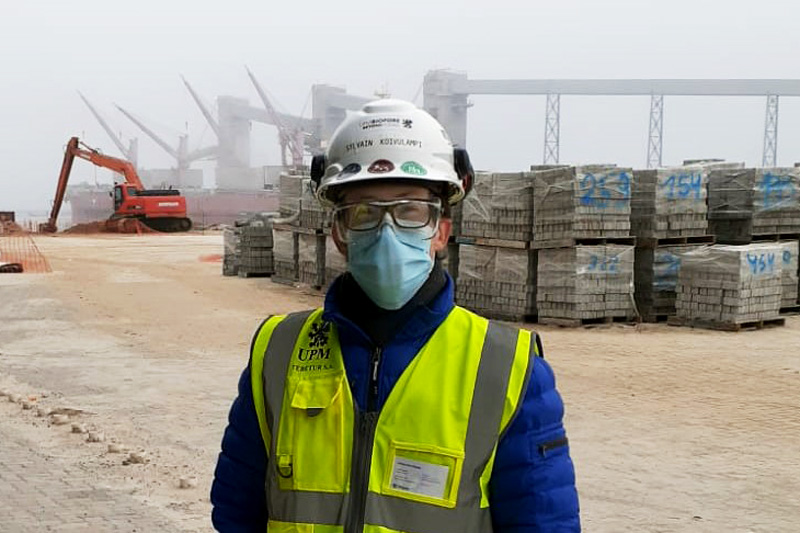 Project engineer Sylvain Koivulampi started working at Fimpec in 2015 when he was finishing his master’s studies in civil engineering. He was looking for interesting work opportunities and potential employers when he ran into Fimpec’s website. Fimpec’s expertise in construction and project management tasks for industrial and commercial projects as well as the firm’s international opportunities interested Koivulampi. So, he contacted the firm’s management directly. A job was found for Koivulampi immediately and he got to do quantity calculation in the Riikinvoima eco-power plant project.

Ever since his job assignments have developed and he has accumulated a handful of projects. After Riikinvoima Koivulmapi has in MetsäFibre’s bioproduct factory project in Äänekoski after which he was able to do his master’s thesis for Fimpec. After graduating he has advanced from site engineer to project engineer. Currently Koivulmapi is doing his first project abroad in Montevideo Uruguay, in the UPM port terminal project. Koivulampi’s project engineer tasks involve cost control and monitoring, quantity calculations as well as schedule planning and monitoring.

Openness at the heart of the action

According to Koivulampi, project work is based on the requirements and success of the project. That’s why he leads his own work, especially by prioritizing his work tasks and keeping the communication open. He organizes tasks according to which are most important for the progress of the project at any given time. In his work Koivulampi also strives to be absolutely honest to both his superiors and colleagues as well as to clients and other stakeholders.

“I want to be open, so that I can tell if I see potential challenges or problems in my opinion, but I’ll also be happy to express it if something feels particularly smart”, Koivulampi explains.

According to Koivulampi’s own experiences, it is particularly easy to be open at Fimpec.

“There has never been a situation where there is something I would like to talk about, but I would get a feeling that I shouldn’t even bother to say it. So, there’s always been such an atmosphere where I feel like I can raise an issue when it feels good to talk about it”.

Koivulampi aims to make the project a success through the management of his own work. It’s important for Koivulampi that his own tasks are progressing at the pace of the projectand that he is responsible for his own tasks so that they are handled in the best possible way. In addition, he contributes to the success of the project by creating an open atmosphere.

“For my part, I try to get along very well with all project members and support the success of other project members in their own work. I strive for this by sharing information proactively. If in my daily tasks I encounter such information that I think is important for somebody else in the project, I share it with them. This is how I try to create an open atmosphere and support others”, Koivulampi describes.

According to Koivulampi, modern leadership also appears to employees at Fimpec as openness, one of the benefits of a low-level organization. The threshold to reach out to supervisors and colleagues is low, or it doesn’t really exist. It is easy to talk about anything. Additionally, it’s easy to get along with coworkers and everyone is very professional. In projects Koivulampi has experienced the modern leadership arising from openness, especially through the project team.

In addition to openness, insight and straightforwardness are important things for Koivulampi in his own work, and according to him they are more than just fancy words. The fact that they really come to fruition is one of the reasons he has enjoyed being at Fimpec for so long. According to Koivulampi they are implemented in projects so that communication is honest, direct and natural, between fimpecians and other members of the project.

“For example, here in the Montevideo port terminal project, they are visible and implemented in such a way that, although there are non-Fimpec employees in the project, we still operate in such a way that we are a seamless part of the entire project management organization. All activities are driven by the overall benefit of the project as the ultimate goal.”

A chance to develop

Alongside openness, developing one’s own competence has been an important part of Koivulampi’s career at Fimpec. He feels that he has been able to develop and update his own skills, because the tasks in each project have always been a little different than before.

“The job description and responsibilities in the projects have been partly similar, but there has always been some variation in the tasks. From each project I have learnt a lot of new and useful things. At Fimpec in particular, I have experienced how in such an organization it is possible to provide job opportunities for experts according to their own strengths and development aspirations.In fact, my entire career at Fimpechas been such that I have been offered assignments in projects where the job description and work tasks correspond to my own competence and support my development”, Koivulampi describes.

Koivulampi describes his passion for better projects also through his own expertise.

“I realize that in a project I am one block in a bigger machine, so to speak. I understand that my own role and tasks, whatever they may be, are important and that is why I want to do my own work as well as possible.”

Koivulampi feels that he has grown at Fimpec both professionally and as a human being. Professional growth includes a deepening understanding of specific industrial construction projects, as well as how the customer-driven subcontracting model and project management adapted to them work.

“In a sense I have also grown as a person, because I have been able to work with different people because co-workers and colleagues change with projects. I have learned tacit knowledge from them, but I have also got to know a lot of new people, from all over the world as well with the latest project. I find it really eye-opening”, Koivulampi sums up.

When Koivulampi started at Fimpec his career was still in the beginning stages. Fimpec has since had a significant impact on his career and competence. Koivulampi has not yet been in a leadership role, but being a leader doesn’t necessarily mean that you need a title to go with it. Koivulampi sees that if there were an opportunity for a leadership position in the future, he would have gotten good examples for acting as a leader from Fimpec.

“At Fimpec, I have learned especially one thing about leadership. If I ever work in a supervisory role, I want to create a work atmosphere where subordinates and colleagues dare to raise issues.This, in my view, relates in particular to openness, honesty and straightforwardness, that I stand behind the things I promise and act as I require others to act. That’s exactly what happens at Fimpec.”

Fimpec taking part in the construction of a pulp mill in Chile
Image
23.6.2021