Working on a cruise ship in France or on the world’s largest container vessels in South Korea? Automation engineer Toni Lakso carries out the commissioning and testing of scrubber systems on ships around the world, and here he shares some insights into his daily life. While varying conditions pose challenges to working on ships, they do not diminish Toni’s fascination with the work. 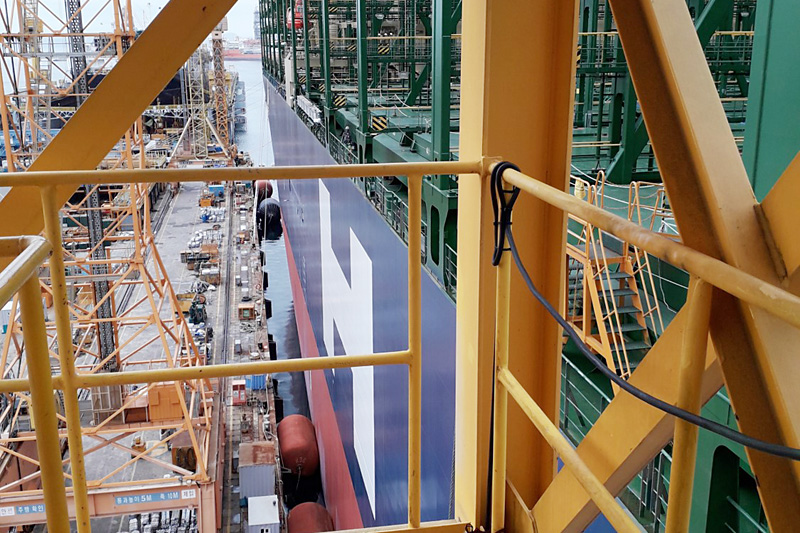 Toni Lakso has just returned from a ten-day work assignment in the Netherlands. He works at Fimpec as an automation engineer. The main focus of his recent work has been on the commissioning and testing of scrubber systems onboard ships. Assignments involving several days of maritime travel make an engineer’s everyday life very interesting.

The purpose of a scrubber, or flue gas washer, is to reduce harmful emissions from a ship. It removes sulphur dioxide and other contaminants from the flue gas that are generated during combustion. Scrubbers work on the same principle as a car’s catalytic converter. The ideal result would be that only water and carbon dioxide remain from the emissions.

Lakso’s job description is diverse. System testing is a big part of his job and entails, among other things, making sure that signals work correctly. During commissioning, the system is tested while the ship is at sea, and changes and repairs are subsequently made. Lakso also conducts service visits that focus on updating the application, with the aim of identifying and fixing any faults observed in the system. All changes are reported.

“New ships are first tested to make sure everything works, and when they are ready, we embark on a voyage of less than a week, during which time the system is then tested based on the previously compiled list. For my part, I fix the application and make adjustments if any problems are found. The goal is for the scrubber to operate without exceeding the emission limit. Of course, it is good if there are no other alarms and the system works fully automatically. However, problems often occur, and they vary depending on the ship, but they should always be corrected,” stresses Lakso.

“In addition to commissioning, I make service visits that involve upgrading systems. On my most recent assignment, my main task was to update the application to the latest version and analyse the bugs that had already been detected. If the fault can be rectified with the system, I will perform the repair myself, but sometimes the faults are mechanical, in which case a mechanic will step in, as was the case recently in the Netherlands,” Lakso adds.

Everyday life of an automation engineer onboard a ship

Lakso has been commissioning and testing scrubber systems on ships since 2019 and has so far had three ship assignments. His first were on a cruise ship in Nazaire, France, where he spent a couple of months in late 2019 and over a month in early 2020. In the summer of the same year, he spent two and a half months in South Korea on some of the largest container vessels in the world. Lakso’s latest system upgrade assignment was on a Chinese-made container vessel in the Netherlands and lasted a total of ten days.

The lengths of his assignments can thus vary considerably, and the intended use of the ship has some influence on the duration of the system testing. 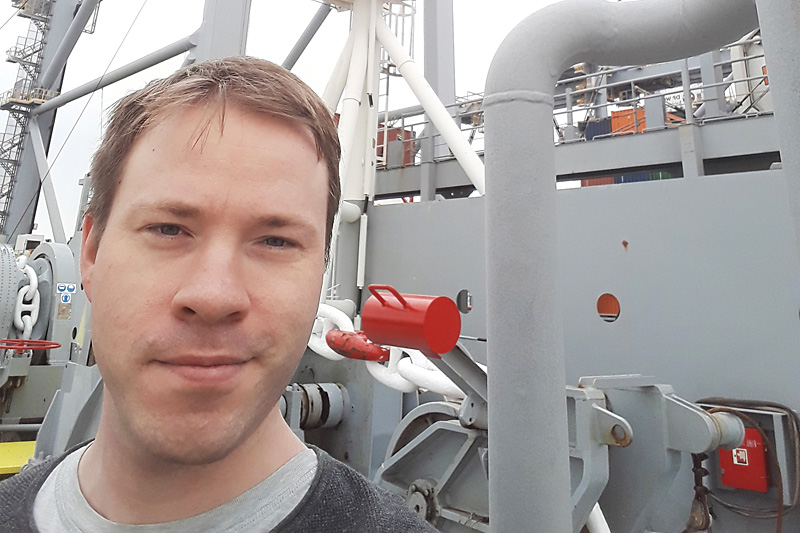 Lakso has been commissioning and testing scrubber systems on ships since 2019.

“Commissioning is always handled quickly for economic reasons, especially when it comes to series of ships. However, cruise ships are not all made the same, so the commissioning time for them is longer. Cargo ships are more often manufactured in a series, which means the more ships there are in a series, the shorter the commissioning and testing times will be. The test periods may be smaller, but there could be several in a row,” Lakso explains.

Lakso does not have to do his job alone, although he may be the only automation expert working with the system.

“Another expert will often be involved, usually an expert in the mechanical field. He’s the one who knows more about the whole process, but I handle the changes to the application myself. The ship’s crew will also be involved to some extent. Some crew members often need to be instructed or guided in how to operate the system, and of course I have to give a report to the crew representative about the things I changed,” says Lakso.

According to Lakso, working on a ship does not leave a lot of free time, but on occasion he has had the opportunity to explore the city and attractions.

“On one of my assignments, I had some free time, so I was able to visit the city with the crew in the evenings. In principle, however, my workdays are long and after work I mostly sleep. Because of the pandemic, we have not been able to see the sights, but during my assignment in France before the restrictions, we were able to visit some museums and Normandy,” Lakso recalls.

The work of an automation engineer on a ship can be unpredictable, and the maritime environment brings a variety of challenges. Permissions from authorities, unpredictable weather conditions and machine failures are some of the twists and turns Lakso has encountered during his ship assignments.

“Generally, improvements to applications can only be made after the ship has been tested. On my most recent assignment, we had some bad luck because after updating the app on the first day, I had to wait the next five days in my bunk because we didn’t get permission from the authorities to drive with a closed loop. We were only able to test during the last leg, but then a severe storm hit, which limited the use of the ship’s main automation system, and we were unable to drive with a very heavy load. To properly tune the controls, we would have needed to alternate between driving fast and slow, but because of the storm we had to drive slowly the whole trip,” Lakso says.

At Lakso’s assignments in South Korea and France, the main engine of the system was broken when Lakso arrived at the vessel. In South Korea, on a sea voyage, the waves put counterpressure on the system’s pipelines, causing the waves to push the water back and fill the tanks, which consequently flooded. A particular challenge on ships at sea is poor communication connections, which means it is not possible to ask for help until the ship has returned to port and the internet connection works again.

Lakso took this picture in Saint Nazaire, France. Toni was told that the British forces blew up the bridge (in the foreground of the photo) to prevent German forces docking during World War II.

These challenges have not, however, lessened Lakso’s motivation to carry out commissioning and testing on ships. In particular, the nature of the work and travel assignments generally appeal to Lakso.

“I especially like these assignments because the overall task is smaller. As a comparison, power plants and similar systems are huge, but on ships I can properly see, experience and test the equipment because the systems are smaller. The work community is also smaller on ships, which makes it is easier to get acquainted with others and makes the job more pleasant than, for example, other work trips abroad or larger projects,” he says.

There has also been talk of his next ship assignments, as Lakso’s enthusiasm is still high.

“There are still twenty Chinese-made container vessels that have not yet been commissioned, so I may be able to perform commissioning for them as well. The systems of each ship are, of course, tested separately. Service assignments are also possible when vessels arrive in European ports. Next, I will be going to a pulp mill project in the US, but after that I’m happy to take on ship assignments again, if and when they are offered,” says Lakso.

Going to work from home can be a bliss