Antti Laine is a project manager at Fimpec, and for the last 11 years he has worked on data centre projects. He is fascinated by their special characteristics and challenging nature.. 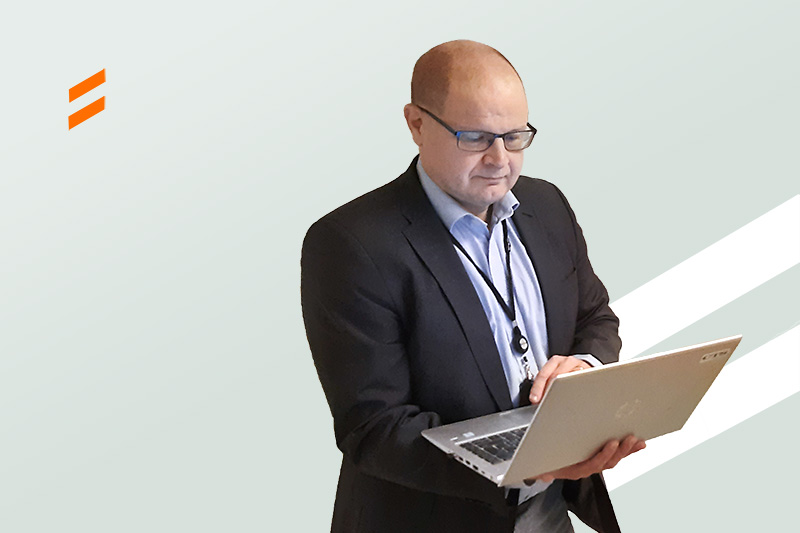 Around 11 years ago, a familiar construction contractor got in touch with Antti Laine. Google was starting to build its first data centre in Hamina, and the project needed people who could speak fluent English. Laine said yes, and he has worked mainly with data centres ever since.

“My tasks and responsibilities have varied from project to project, but quality and occupational safety issues have always been part of the job. They are close to my heart,” he explains.

Data centres are a special area of construction

Laine ended up working on his first data centre project somewhat by chance, but soon noticed it was a happy coincidence. The project was of a special nature and involved a kind of construction that was still relatively new in Finland in the early 2010s. This was excellent news for Laine, who was willing to learn and test his limits.

“Data centres are somewhat unique construction sites, as they combine a range of different things and the technology used in them develops at a rapid pace. If you build two data centres in the same area one after the other, you can be sure that the technology in the second will be new in comparison to the first. That provides a nice challenge for engineering and construction,” he explains.

Laine points out two other things that are highlighted in data centre projects. One is keeping to a schedule and the other is extremely stringent quality requirements.

“Delays to the project are not an option, and the deadline is the deadline, no matter what happens. Data centres are sold in advance, and they must be usable when promised.”

“It’s also not enough for everything to work flawlessly in a data centre. Everything also needs to look finished, right down to the smallest details, because new customers are brought to the data centre to be shown that everything is well taken care of. In addition, the cleanliness requirements are at about the same level as those used for hospitals.”

Motivated by a thirst for knowledge

Antti Laine holds an M.Sc. (Tech) in technical chemistry. He is also a trained industrial engineering manager in the construction industry and a qualified pharmacist. In autumn 2020, he began to study for a doctorate in information technology at ÅboAkademi University alongside his work. His doctorate studies focus on data centres.

“I’ve always been interested in developing my skills and increasing my knowledge. It’s in my nature to constantly read everything I come across. I think that will continue for as long as I draw breath,” says Laine.
Laine’s educational background contains plenty besides construction and engineering. He says that it has been valuable in his work.

“Some methods and techniques can be applied in industries other than the ones they originated in. Personally I’ve found my varied educational background to be incredibly useful,” he adds.

Laine wants to emphasise the importance of language skills to anyone aiming at a career in the construction industry. Language skills open up international opportunities, but can also prove invaluable in projects carried out in Finland, too, as Laine’s own experience shows.

“You need fluent English as it’s the main working language in data centres and many other projects involving international companies. In addition, it’s well worth learning at least one, but preferably two more other major languages as well.”

For Laine, language skills opened the door to the wonderful world of data centres. Since his studies, they have provided him with work experience worldwide.

“I’ve worked in the USA, Australia, Sweden, Norway, Belgium, France, Germany, Bahrain, and Saudi Arabia. Some trips were just very short site visits, while others were longer stays, but all of them taught me valuable lessons.”
“They taught me an open-minded attitude to how things can be done. You can’t go out into the world thinking that things must be done as they are back home; instead, you need to adapt to the environment and learn from it. The stranger and more different the environment, the more it can teach you,” says Laine.

Antti Laine’s career started off with 10 years of chemical industry research. Since then, data centres have taken him to various employers, including Google. Laine joined, or rather returned, to Fimpec – then CTS Engtec – in early 2020 as a project manager responsible for data centre tasks.

“I previously worked at CTS Engtec for a while. It made the decision to take on my current position much easier, as I knew that I would be working with friendly, fair, and committed people. A good, fair atmosphere is important in the workplace, and I appreciate that work here is very down-to-earth. One more thing I’d like to point out is that this is a workplace where supervisors are easily approachable; there are no ivory towers.”

Laine also appreciates that the company has made responsibility one of its core values. He says that promoting sustainable development is something he holds close to his heart.

“It’s a broad issue, and it’s important to try to improve responsibility overall. There are good opportunities to have your say on responsibility in the preparation and engineering phases of projects.”

“I live in Kotka and previously worked in Helsinki. Working in Kotka has shortened my commute significantly, so now I have more time to spend with my four-and-a-half-year-old child. The essential thing is of course that data centres are an important part of our business, so I was offered interesting work.”

“We Finns are currently living in interesting times with regard to data centre business. The lowering of excise duty on electricity promised by the government could encourage a wave of investment totalling billions of euros, much like the one seen in Sweden,” adds Laine

Other possible points of interest

Going to work from home can be a bliss