Metsä Group’s bioproduct mill is the result of teamwork

The biggest project in the history of the Finnish forest industry, Metsä Group’s bioproduct mill at Äänekoski, started up according to plan on 15 August 2017, slightly over two years after its construction began. Officially, the mill was inaugurated on 18 October, meaning that the project was successful and progressed according to the plans. The finishing touches, such as insulation and other work in the mill area, will nevertheless be carried out for another year or so – but also according to plan. Fimpec was responsible for the management and supervision of the bioproduct mill’s construction work and equipment installations. 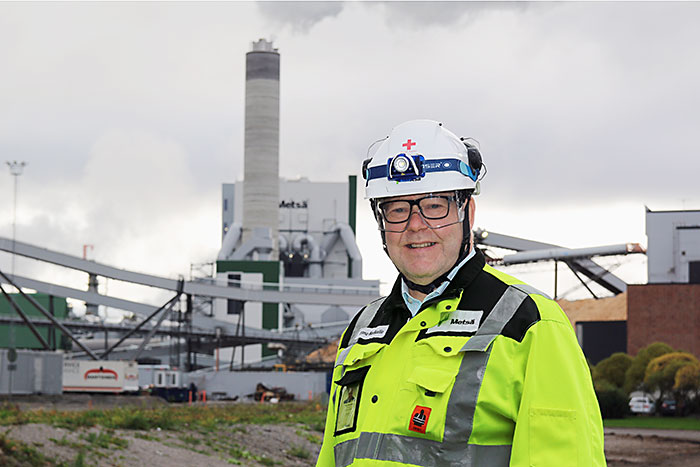 We asked Timo Merikallio, Project Director of the bioproduct mill project at Metsä Group, what the project was like from a project director’s point of view. Below are his answers to this and a few other questions.

This was a sizeable and interesting project that we all worked together on with a good team spirit. The project’s preparation and planning work began in 2013 with a small, three-member team, and in 2014, we recruited twenty more people to the project team, after which the planning began in earnest. The investment decision concerning the bioproduct mill was made on 21 April 2015, and construction began in May that same year.

You were able to stick to both the schedule and the budget at Äänekoski. How did you achieve this?

Throughout the entire project, our starting point was that there were no options in terms of the schedule. We considered the schedule the one inviolable thing – everything else was subordinate to it. And when you’re able to stick to the schedule, you can usually stick to the budget as well.

On the other hand, what’s crucial in terms of schedule is good planning, which, as mentioned, we started back in 2013 – a good while before the project was even announced. The pieces of the planning project were put in place, and during the construction work, we were very strict about sticking to big decisions and acting according to them.

The operations were also as transparent as possible at all times, so that everyone had a clear idea of where we were. This transparent management also gave us a chance to react to any problems in good time.

More than 3,000 workers worked on the construction site simultaneously during the busiest times. All in all, the number of workers throughout the project came to 13,500, while the various companies involved numbered more than a thousand. How did you hold it all together?

There were roughly a hundred subcontracts in construction alone, and the client organisation monitored all of them itself. It wasn’t the easiest way to go about it, but it did provide a good result. Weekly meetings played an important role in the site’s internal flow of information. The bioproduct mill site also had a project management system that provided accurate and up-to-date information on the contractors and workers on site and their nationalities.

Another key aspect was that our hundred-strong project team worked as one, even though they came from different organisations. About 30 of the team members were Metsä Group’s own people, while the rest were external recruitments. Everyone was integrated into the team from the very start, and information was shared on this basis.

You didn’t manage and supervise the construction yourselves, but left that in the hands of an external party. How did you arrive at this decision?

The solution was natural, given that Metsä Group doesn’t have a development unit of its own and therefore no competence in construction-related matters, which are an area of their own. The essential aspect of this was that, rather than outsourcing the construction or any other responsibility, for that matter, we integrated the people responsible for them into our own team, regardless of the company they came from.

Fimpec was selected to manage and supervise the construction work as well as the equipment installations. How did you make the selection and what were your experiences of the cooperation like?

Fimpec was selected for these tasks through a tendering process, just like all the other external parties involved. It did well in the tendering for these areas and was awarded the contract on the basis of its tenders.

I’m happy with Fimpec’s work. Of course, the most important thing is that we were successful in sticking to crucial aspects, such as the schedule and cost estimates. Fimpec’s people were also good to work with – they’re good at teamwork.

This was no less than I expected, of course, given that I had already worked with Fimpec and Pekka Salomaa. Having honed the interfaces during previous projects often provides you with a very specific advantage.

What do you consider important in the management of a construction project?

The most important thing of all is the ability to stick to schedules and the cost estimates. Pekka Salomaa and Fimpec’s involvement in the project at a very early phase were a great help in this. Pekka brought expertise to the planning of the construction and developed a good insight into the project as a whole.

All in all, I think it was important that the people responsible for the construction were integrated into the project organisation. Here, too, what mattered was that we functioned as a single team, regardless of our individual areas of responsibility.

All told, I think that competent project professionals, such as Fimpec’s personnel, play a major role in a project such as this one. For them, large-scale projects of this kind are routine work, whereas someone who works at a mill may face a project like this maybe once in a decade, if even that frequently.

In my experience, project professionals are also very committed to the projects they work on and give them everything they’ve got. And that’s natural, too, given that, to them, a successful project is equal to a future reference.

Planning tasks for the pre-design phase

Preparation and control of project planning

The builder team strengths up to 23 people

Other possible points of interest

Projects flow with the help of Fimpec IPD and Lean

Tunnel jacking at Kakolanmäki in Turku is complete
Image
1.9.2020

Tunnel jacking at Kakolanmäki in Turku is complete