Frontpage › News › Tunnel jacking at Kakolanmäki in Turku is complete

Tunnel jacking at Kakolanmäki in Turku is complete

Jacking proved to be a functional solution in Turun seudunpuhdistamo Oy’s project to improve a removal channel in which an 800m-long pipe with a diameter of 2.5m was successfully jacked to a depth of 8m without excavating streets. Fimpec was responsible for project management, supervision, and safety coordination. 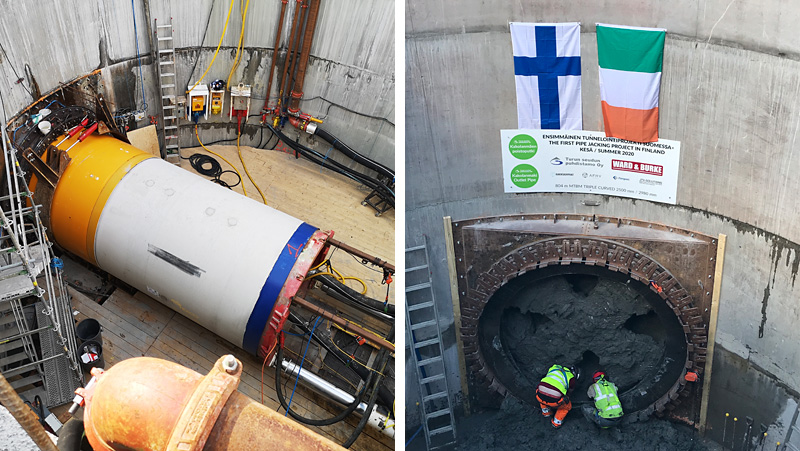 In its project to improve a removal channel, Turun seudunpuhdistamo Oy had a new removal channel built, through which treated wastewater would be led from the Kakolanmäki wastewater treatment centre to Turku harbour. A special feature of the project is that the majority of the removal channel was created by jacking, which spares the environment and minimises the carbon footprint as well as disruption to traffic and residents.

For the section of the removal channel that was jacked, the ground was only excavated at the channel’s start and end pits. The stretch of pipe jacked between the pits measures around 800 metres and has a diameter of 2.5 metres. In the method, 4-metre-long pipe elements are jacked into the ground at a depth of around 8 metres one element at a time, while simultaneously removing earth from the pipeline ahead. The Irish company Ward and Burke Group Ltd acted as the jacking contractor.

The channel jacking began in June 2020 with a start pit in the harbour area, and an important intermediate goal was reached on 4 August 2020, when the approximately 800m-long jacked section reached its destination at the end pit. The tip of the equipment precision-bored its way to a predetermined site and breached the wall of the end pit having travelled around 25 metres per day on average.

This was an extremely challenging and exceptional project, and no corresponding method has ever been used in Finland to this scale. Jacking was completed in just over five weeks; two weeks ahead of schedule.

“The jacking was a great success! It was completed on time and implementation caused no significant disruption to the environment or additional costs. We are extremely satisfied,” says Turun seudunpuhdistamo Oy’s Technical Manager Jarno Arfman, who was responsible for the project.

Fimpec is responsible for project management, supervision, and safety coordination in the project to improve the capacity of the removal channel. Project Manager Esa Kunnassaari from Fimpec says that using a method that had not previously been used in Finland highlighted the importance of advance planning and preparations for any possible exceptional situations. Risk assessment must be carried out thoroughly, any exceptional and unexpected situations must be carefully mapped out, and procedures for them must be planned in advance.

“Jacking was carried out in clay deposits, moraine deposits, and a road area on Pansiontie road. We passed underneath the existing municipal infrastructure without disrupting it when we installed the removal channel. Jacking also meant there was no disruption to the traffic on Pansiontie road during the installation. Many residents in the area were unaware of the whole phase since the method created minimal disruption to the environment.”

Kunnassaari says the method had many advantages. The need for excavation is minimal, traffic can continue as normal during the work, and the pipeline can be placed deep below the ground underneath existing municipal infrastructure.

“We believe that this method has the potential to be utilised more widely in Finland, and for the knowhow obtained from this project to be of use in corresponding projects in the future,” he states.

“For Fimpec, this was a really significant task dealing with the management of complex-structure project. It allowed us to demonstrate our competence with demanding construction works that utilise new technology,” adds Business Unit Director Jorma Paananen.

The project will be completed in 2023

The removal channel project also includes the construction of a UV disinfection plant in connection with the Kakolanmäki wastewater treatment plant. After treatment and UV disinfection, the treated wastewater that is discharged into the sea will meet hygiene requirements set for swimming water, and the hygienic environmental load on the Turku sea region will be significantly reduced. The entire project will be completed in spring 2023.

Turun seudunpuhdistamo Oy is a regional service provider owned by 14 municipalities. It offers its owners a high-quality and cost-efficient wastewater treatment service. The company is responsible for operating the Kakolanmäki wastewater treatment plant and for the results of the treated wastewater.

Caption: Jacking of the removal channel began in late June with the start pit (left) and was completed at the end pit on 4.8, around two weeks ahead of schedule (right). In between the two pits is an 804m section of jacked pipe. (Pictures: left JuhaVäyliö and right Jarno Arfman)

Fimpec’s Turku-based operations will be merged into Pitkämäen­katu in preparation for the merger
Image
4.2.2022

Fimpec is responsible for project management and supervision in a project to boost the capacity of Turun seudunpuhdistamo’s removal channel
Image
29.5.2020